Judy read a thank you letter from the Gift of Hope Organ and Tissue Donor Network. MHW donated money in memory of Paul's father who recently passed.

Jackie asked if members would be willing to donate a basket of books for a silent auction raffle benefiting the Claus family. Emory received a liver transplant from her father last month. Twenty-five dollars was taken from the treasury and members threw in enough additional funds to purchase a second raffle basket. The event will be in Lowell on June 2, 2012 and all are invited to attend. Jackie will be doing facepainting. She also suggested MHW donate a basket of books to a children's hospital annually. 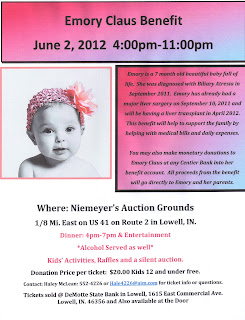 Judy used MHW funds to purchase the Writer's Guide to 2012. Any member can borrow the book for a month at a time. It includes tips, advice, and, info on agents and publishers, etc. Luneil will take it home this month.

Joan showed members the latest issue of the local Family Flyer. Her poem The Legion was included in the May edition. Congrats Joan! The Family Flyer is a monthly publication which has a readership of over 113,000 people. 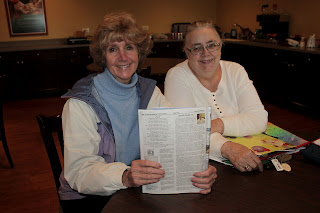 Lorraine reported she sent her story Marty the Moose to three publishers. She heard back from one who said they had just published a story on a moose. Lorraine then read her short story The Rhubarb Patch and accompanied recipe for Rhubarb Bar Cookies.

Luneil read her poem Doxie Dog which goes with her recipe for Cheese Hot Dog Wraps.

Judy shared her poem Very, Very, Slushy and recipe for Very Berry Slushie complete with her own computer graphics.

Jackie and Judy reported on the Indiana Writers' Consortium PoPP (Power of Poetry Project) Awards Assembly that was held at Taft Middle school in April. Elementary students from 4 area schools participated. Winning poems and illustrations were published in this year's PoPP publication. Certificates and medals were handed out and place winners also received a gift card.

Jackie reported she sent a poem into the Words for Riley poetry contest for Riley Children's Hospital. Winners will be notified by May 31. Jackie also sent in a poem to Chicken Soup and reminded members she posted their current needs on the "events and contests" page on the blog. Finally, Jackie announced she was awarded an honorable mention in the Oregon Poetry Association Spring Poetry Contest. She then read her winning haiku Quietly Encased.

Cathy read Five More, One Mores which is a short story about her granddaughter Zoe who was refusing to finish her cereal. Members brainstormed ideas for a related recipe. The group hopes to have at least 20 recipes with stories or poems that can be included in our first publication.