Mari, Valia, Karen, and Jackie discussed the Prestivus Festival. Although attendance was down due to the high temps, Mari sold several books and Jackie sold a few notecards. Pete read a few of his riddle poems and Valia had an extensive fossil and mineral display. Judy and Valia’s geological timeline printout and stickers were well received. 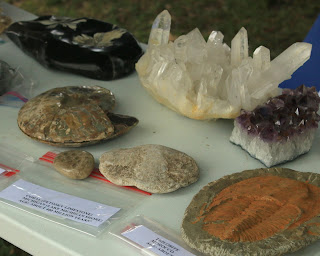 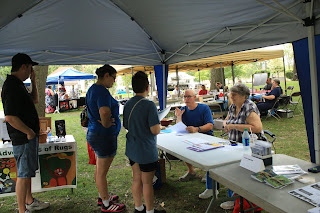 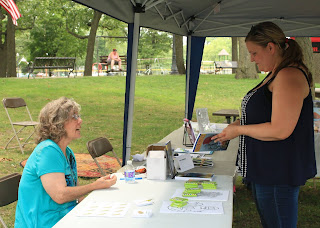 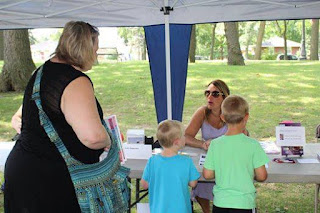 Karen would like to have another family friendly event at the train depot in Griffith next June. She suggested doing a presentation and readings in a train car as well as having the barrel train ride to attract more attendees.

Mary sent a list of over 50 museums to her publisher and included a summary about her new book Ruby’s Red Squiggle.  She was excited to report Ruby will be carried by the Museum of Modern Art bookstore in San Francisco. Mari will also have a piece in an anthology for children age 4-8 due out by the end of the month. Six American and six British authors will be featured.

Patty, who has been participating in Nanowrimo challenges, wrote 55,000 words in the month of July. She explained the process and freedom she found when refraining from editing her work as she writes.

Karen is on full revision #5 for Haunting Mom. Several members sent her suggestions after downloading and reading her first three chapters. Patty explained that the REVIEW tab on Word brings up a margin where comments for the author can be inserted.

Ruthann read the first poem she ever wrote entitled “Missing Lynx” about her pet cat. Members liked the rhyme scheme and powerful word choice, only suggesting a few minor edits.

Helena read a speech she wrote entitled “A Belated Tribute.” Members thought Honda would appreciate hearing her homage  to her Odyssey.

Valia read “India…ana” from the IU Press anthology Undeniably Indiana. He also brought in the book to show everyone.

Patti read part of chapter 4 New Friends from her YA novel Vienne. Jackie will send out the entire chapter for members to critique.

Posted by Magic Hour Writers at 4:28 PM No comments: