Jackie and Valia reported they both received rejection letters.

Mari announced that Flying Turtle Publishing will be accepting fictional/factual science based stories in February.

Members discussed the online submission process. Karen stated although it is convenient, many submissions may not get to their intended audience if filters are set to flag certain words.

Christmas Book Update:  Everyone needs to send Mari a 3 or 4 sentence bio along with a head shot for the Christmas book. She also wants to know how you want your name listed on the copyright. She will be the one editing the children’s stories. Mari explained her plans for the illustrations and has decided the book will be hard cover. Mari will need photos for each poem. Members decided to include a section with Christmas tips. We will be able to sell the book at the IWC banquet on October 10th.

Mari read Mother Jessup’s Hottest Christmas and A Christmas So Nova. Both will be included in the Christmas book.

Valia read his poem "Goodbye to Cecil and Others of Similar Fate".

Ruthann revised her story and passed out copies to each member. She would like feedback before she submits to Mari.

Pam read her Christmas story about a little girl who desperately wanted a Spirograph toy. Members tried to help her think of a catchy title.

Jackie read her poem "God's Greatest Gift" then her short story Flamingo and Moose. She included sketches and a few suggestions for the artist who will be working on the project.

Judy read her short story Fidget. She also showed off the illustrations she is working on.

The IWC/MHW Stream Line event is scheduled for Wednesday, September 9th. Valia plans to bring in fossils to show the children.  Judy will read My Grandma is a Science Teacher. Jackie will do a presentation on Poetry in Pictures, and Ruthann will read a chapter from her book The Adventures of Boopy. 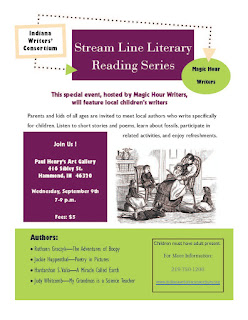 The next MHW meeting will be on the 3rd Thursday this month. (One week later than usual). We will meet at Rosati’s on September 17th at 6:30 p.m.


JSH
Posted by Magic Hour Writers at 6:34 PM No comments: