Rachael is a science teacher at Lake Central High School.

Judy, Suzy, and Karen participated in the Lake County Local Author Book Fair at the Merrillville Library held December 3rd. Judy met an illustrator and suggested we ask her to be a guest speaker at one of our upcoming meetings. Members were impressed with the illustrations in the books Judy brought in.

Judy will be staring a web page for MHW. She would like us to read children’s books and include our reviews as a regular feature on the new site.

Jackie reported she won a large cash prize in a magazine photo contest and the picture will be published early next year.

Donna read her story White and Black Animals in Bella’s Zoo. She plans to include a crayon or dry erase marker so children can draw their own pictures in the book as they read about each animal Bella encounters. Donna also has ideas to make it a series.

Rachael read the first draft of her rhyming story One Kindness at a Time. Members suggested she try writing a non-rhyming version as well and encouraged the idea of continuing the story in a series.

Valia read his poem Old Man and the Mango Stick.  His inspiration for the poem was Shel Silverstein’s The Giving Tree.  The poem follows a man and his branch from a mango tree through a lifetime.  The core idea is how all things have a spirit of life that creates a universal karma.

Next he shared an article he wrote for the Huff Post Religion Blog in 2012.  This true story recounts the friendship between a Sikh poet, a black Baptist minister, and a white Methodist mother who had met in 1969.  Valia was the poet.  Although separated for forty years and losing contact, at the reunion, one of five Sikh religious symbols, the kada – a metal bracelet, remained on the arms of the two men throughout all those years.

Karen read a Christmas story from her developing chapter book that is a sequel to Railroading Harry.  In this story, Harry, a rabbit adopted by two men who inhabit a railroad caboose, is denied some of his favorite treats because they are going to be used for Christmas.  Harry, who was just introduced to the word “Christmas” is pretty sure, because of the denials, that Christmas is not for him.

Karen gave a great history of how cabooses were often used by railroad men as “homes” as the trains travelled 250 miles to a point were the caboose was changed and the men then returned to the original starting point.  These men would get to know people, especially children along the way and would often share celebrations of the seasons with children.

Rachel talked about an idea she has for a book about students who create a school based on what they think it should be like.  We talked about the possible target audience and the group encouraged her to start writing.  Suggestions were given including the idea that the point of view of the narrator (an adult teacher or a teen student) would help determine the target audience. 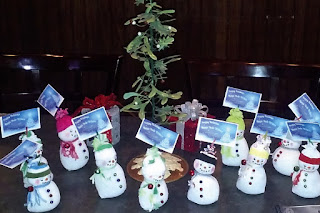 JSH and JLW
Posted by Magic Hour Writers at 7:47 AM No comments: